The little things in life are just the best.....

Today, one of our chickens was extra bitchy. She was gackering & feisty all day, wouldn't let us pick her up and move her, and she kept pecking on her loyal friend, Snowball.

Some time during the afternoon, I was Skyping with my Mama in Germany, when Pepper jumped up on the dresser on the porch and started pecking on the window.

"How strange" I thought, they never come in until it gets dark.

So my son got the chickens, and put them in their makeshift coop. Pepper immediately went to the back and sat in the wood shavings instead of the roost. Then she began covering herself with shavings....while the other chicken started picking them right back off :). This was quite entertaining (I need a life!), and got even better when Snowball turned around and SAT on her and began gackering herself. That's when Pepper drew the line and pecked "Get the hell off, sister!".

My son kept checking on them, he was hoping for his first egg. She was acting weird, and it is about time for them to start laying.

My son carried his egg around, called his daddy, emailed his 4H project leader, and told all the neighbors. It was like a birth :).

4 hours later I was outside taking down clothes, when my son come careening out with an egg in his hand...."MAMA, SNOWBALL LAID ONE TOO!"

That's my chicken, she was not going to be outdone. 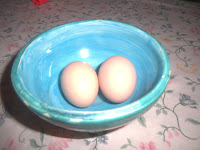 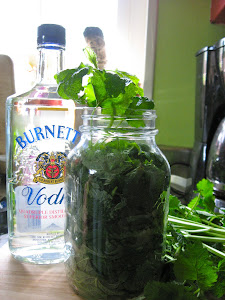 Visit my website, Goddess in the Groove, to learn more!

I am a gypsy, a kitchen witch, a student of the divine gifts Mother Earth gives us :). Here, you will find my adventures & experiments as I am on my journey. I am learning to plant foods to sustain us, using the herbs that spring up in my backyard (mystery!) to heal, and am finding ways to replace all synthetics in our home with natural alternatives. Please join me! And, if you want to know more about me, go to About Me :).

If they don't grow in my backyard, I get them here:

Goddess in the Groove